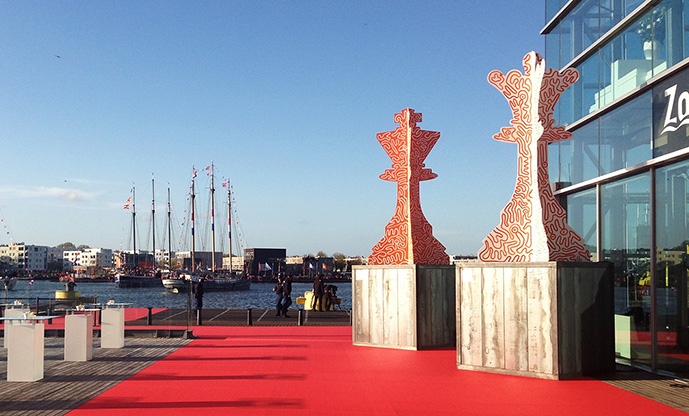 Amsterdam, May 3 2013 - An orange King and a white Queen were the shining eye-catchers of the reception committee for the 'Koningsbal' in the 'Muziekgebouw aan 't IJ', the final part of the inauguration of Dutch King Willem-Alexander. After a fairylike 'Koningsvaart' on the IJ, King Willem-Alexander, Queen Máxima, Crown Princess Amalia, Princess Alexia and Princess Ariane were welcomed by the Royal chess pieces, made by graphic artist Thomas Bijen. This project of the young graphic artist, a King and Queen with a playful illustration of elements of the Kingdom of the Netherlands, could not have been realized without the support of MPM, a company with blue blood in their veins. 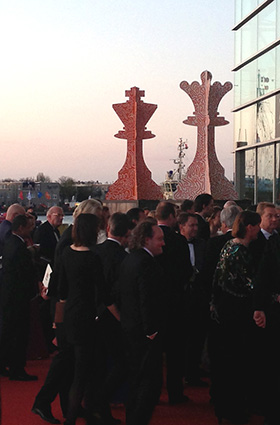 Last official part of the stepping down of Queen (and now Princess) Beatrix and the inauguration of King Willem-Alexander (April 30), was the 'Koningsvaart' on the IJ and the 'Koningsbal' in the 'Muziekgebouw aan 't IJ'. As the royal family is very interested in art, the organisation committee wanted to have an appropriate and special visual artwork in front of the music theatre. From all proposals the organisation committee elected the visual artwork of young graphic artist Thomas Bijen as the winner. A four meters high orange King and white Queen on a two meters high pedestal. On the side of this steel chess pieces, Bijen made one of his famous graphic artworks, a very playful and fairylike creation of all kind of elements of the Kingdom of the Netherlands. In the spotlights Bijen's King and Queen were real eye-catchers that evening, very much appreciated by the royal guests and a great final part of a very special day. Thomas Bijen graduated as an industrial designer at the TU Delft. The combination of technology and creativity raised his already existing interest in graphic art. To make his dream of the Royal chess pieces come true, Bijen was supported by MPM International Oil Company. The company from Delft recognized Bijen's talent in a very early stage. A great artwork of the young graphic artist has a prominent place in MPM's lobby. As a Dutch company MPM wants to support upcoming talent on their way to the top. When they heard about Bijen's project for the inauguration, MPM immediately stepped in to support. MPM is happy they could contribute to this very important and great day for the Netherlands. MPM International Oil Company B.V. is one of the youngest and fastest growing Dutch oil companies. The company is located in Delft and is total supplier of all liquids for the automotive, shipping and agricultural marked and industry. MPM's main colour is blue, the perfect match for a day where 'blue blood' was in the spotlight.